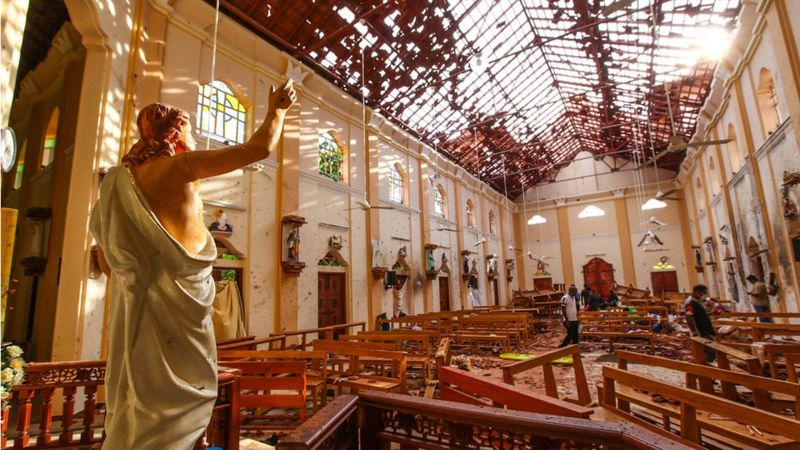 By Hafeel Farisz and Joanna Slater

COLOMBO, Sri Lanka — In Sri Lanka’s first national elections since the devastating Easter Sunday terrorist attacks, the vote may come down to the question of security.

Sri Lankans will cast their ballots Saturday for a new president. The man tipped to win is a familiar face: Gotabaya Rajapaksa, once the country’s defense secretary and the younger brother of Sri Lanka’s former president Mahinda Rajapaksa.

His supporters credit Gotabaya Rajapaksa with helping to end the island nation’s brutal, decades-long civil war in 2009. During the election campaign, he has made national security a focus and promised to keep Sri Lankans safe.

But for others, including the country’s Tamil minority, a Rajapaksa victory is cause for fear. His tenure as defense secretary was marked by accusations of human rights violations, including the murder and abduction of journalists and political opponents. They expect a crackdown on dissent and a turn toward authoritarian rule. Rajapaksa denies the allegations.

Saturday’s presidential election is a decisive moment for the nation, said Gehan Gunatilleke, a human rights lawyer and research director at Verité Research, a think tank in Colombo, the capital. “We have to understand that Sri Lanka is in the midst of a project that is much larger than one election cycle,” he said. “It is a choice between intolerance and freedom.”

Across the political spectrum in Sri Lanka, there is widespread anger and frustration at the failure to prevent the coordinated terrorist attacks that took place April 21. The nine suicide bombings were carried out by local extremists and claimed by the Islamic State. The attacks killed more than 260 people at churches and luxury hotels in three cities.

What’s more, the bitter rivalry between President Maithripala Sirisena and Prime Minister RanilWickremesinghe impeded the functioning. A subsequent investigation and parliamentary hearings revealed that the government had received specific warnings of an impending attack but did not take preventive actions of the government’s security apparatus.

“We need a country to live in, and it is a country which needs to be safe,” said Kumara Perera, a manual laborer in Colombo who earns less than $3 a day. He believes Rajapaksa is the right person for the job. The current leadership “had five years, and look at what they have done,” he said.

Sirisena is highly unpopular and is not standing for reelection. While a record number of candidates — 35 — have submitted nominations, the race has two clear front-runners: Rajapaksa and Sajith Premadasa, a candidate from the current prime minister’s party. (Sri Lanka has a directly elected president as well as a prime minister selected by parliament.)

Premadasa has also assured voters that national security is a top priority. He pledged that if he wins the presidency, he will name a decorated army commander, Sarath Fonseka, as his defense minister. Fonseka commanded the Sri Lankan army at the end of the civil war and is a bitter rival of the Rajapaksa family: He was Mahinda Rajapaksa’s chief rival for the presidency in 2010.

There are no polls to gauge the state of the campaign. Some strategists believe the race between Rajapaksa, 70, and Premadasa, 52, has tightened in the campaign’s final days and that Premadasa could pull off a surprise win. Premadasa has drawn support from the country’s rural areas, where his message of alleviating poverty has resonated.

Premadasa’s supporters say a Rajapaksa victory would be a win for a strident brand of Sinhalese nationalism, which could exacerbate existing tensions in Sri Lanka’s multiethnic, multireligious polity.

Most of Sri Lanka’s 22 million people are Sinhalese Buddhists. But there is also a sizable Tamil minority, most of whom are Hindus. Muslims consider themselves a third ethnic group, and there is also a Christian community.

Among Tamils and Muslims, there is trepidation at the idea of a Rajapaksa presidency. Gotabaya Rajapaksa has said he intends for his brother, the former president, to assume the post of prime minister. He also has the support of hard-line Buddhist nationalist groups accused of stoking religious tensions that have resulted in violence against minorities.

K. Ramesh, 40, a native of Jaffna in the largely Tamil northeast, works in Colombo as a driver. He said he feared the worst if Rajapaksa wins. “The military will take over,” he said. “They are already flexing their muscles in anticipation.”

Members of Rajapaksa’s Podujana Peramuna party say there is no reason for alarm. Gotabaya will be “president of all Sri Lankans — of the Sinhalese, Muslims and Tamils,” said Mahindananda Aluthgamage, who served as a minister in the government of Gotabaya’s brother. “The country wants security, peace and stability, and that is what he will deliver.” Meanwhile, he said, the allegations of prior human rights abuses are “unfounded lies.”

Malinda Seneviratne, a former newspaper editor turned political commentator, echoed that view. “The choice is really between weak and effective government,” he said. “A choice between a government willing to bow down to the United States and other powers, or a government serving the people’s interest.”

Both Gotabaya and Mahinda Rajapaksa are viewed as close to Beijing. China has sought to extend its influence in Sri Lanka through major infrastructure projects dogged by allegations of corruption, including the development of a port city on the shores of Colombo. ‘It was all a pile of dead bodies’: Man recalls Sri Lanka blast Nalaka Sanjeewa Pieris said he helped pull the injured from the St. Sebastian’s church in Negombo, Sri Lanka, after it was bombed on April 21.

One issue complicating Rajapaksa’s candidacy was his American citizenship, which he received in 2003 after moving to Los Angeles in the early 1990s. On Sunday, Rajapaksa’s lawyers held a news conference to display what they said was a certificate proving he had renounced his citizenship earlier this year, but his opponents questioned its authenticity. A spokeswoman for the U.S. Embassy told a Sri Lankan television station that the embassy was unable to comment on individual cases, citing privacy regulations.

Compared with prior national elections, the current campaign has been largely free of violence. On Thursday, an author who published a book critical of the Rajapaksas was stabbed by four assailants who accused him of harming Gotabaya’s campaign, according to a report by AFP.

For voters like Chandana Henadeera, 52, who supports his family by driving an auto rickshaw around Colombo, the lack of pre-election violence was a relief. His main concern is earning enough money to pay for the education of his three children. “This life consumes me,” he said. “We don’t have enough money to eat, let alone educate my children. I just hope someone will ease our suffering.”AD