20A to Constitution: Further hearing fixed for tomorrow 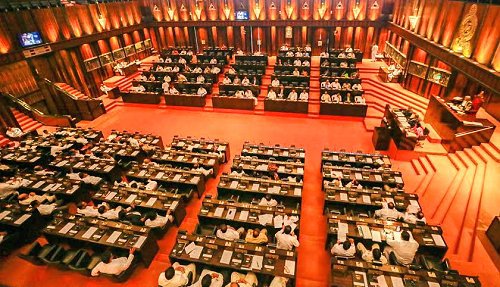 UPDATE:  The Supreme Court yesterday fixed for tomorrow (02) further hearing into 39 Special Determination petitions filed challenging the constitutionality of the proposed 20th Amendment to the Constitution.

The Chief Justice announced that the Supreme Court intends to conclude hearing by Friday (02) itself.

When the petitions took up for further hearing for the second consecutive day, Counsel Pulasthi Hewamanna appearing for Transparency International informed the Supreme Court that judicial power

of the people could be affected with the introduction of the 20th amendment to the constitution. He said the new bill would allow the president to make appointments to the apex courts solely on the discretion of the President.

“Legislative power and judicial power of the people could be curtailed once the mechanism for urgent bills is introduced. Currently, people can challenge the acts of the President through Fundamental Rights petitions”, Hewamanna said.

“Public trust doctrine is connected with Article 1 and Article 3 of the constitution. Several clauses of the bill violate public trust doctrine since it deters the independence mechanisms monitoring public funds. The Election Commission is required to be independent. The bill takes away certain powers of the election commission which would definitely affect people’s franchise rights,” he further added.

Hewamanna further submitted to the court that most of the clauses are violating the democratic rights of the people including franchise rights and freedom of expression.

Counsel Shiral Lakthilaka appearing for former Central Province Governor Keerthi Tennakoon told the Supreme Court that the 20th Amendment has been drafted with the objective of monopolizing the executive president.

“This implies the future president would not be much concerned about checks and balances governing the system.

Popular sovereignty is explained in Article 3 of the constitution. I am not against the executive president. We are not challenging the immunity of the President. But concentration of all powers to one entity would not be healthy for democracy,” Lakthilaka said.

The executive wants the Auditor General to be subservient to the President. Removal of the national audit commission is a violation of fiscal sovereignty.

This is not an ordinary constitutional amendment. It would change the basic structure of the constitution and would affect the basic principles of people’s sovereignty, separation of power, limited governance and judicial review, he said.

Counsel Gehan Gunatilleke appearing for Samagi Tharuna Balawegaya propaganda Secretary Rasika Jayakody submitted to court that repeal of Article 91(1)(d)(xiii) of the Constitution through clause 17 would affect the sovereignty of the people as it permits dual citizenship holders to enter Parliament.

Gunatilleke said that holding citizenship in any other country typically entails pledging allegiance to a sovereign other than the people of Sri Lanka.

Gunatilleke argued that the Clause 17 would therefore require approval by the People at a Referendum in terms of Article 83 of the Constitution.

Senior Counsel Viran Corea appearing for Attorney-at-Law Lihini Fernando moved the Court not to accept or pronounce anything regarding the proposed amendments to be brought during the committee stage since it was introduced without re-gazetting.

Viran Corea stated that no government can take away constitutional provisions given that weaken effectiveness of checks and balances by a two third of majority alone.

Corea further submitted to the court that if those checks and balances are taken away, abuses will result in a weakening of the Sovereignty of the People.

He further stated that dual citizens entering Parliament creates divided loyalties that can prejudicially affect ‘independence’ of the republic which is protected by Article 1 itself, which says Sri Lanka shall be an independent republic.

Mr. Corea concluded that as this is an entrenched provision, a referendum is needed to allow dual citizens to start influencing legislative functions.

20A to Constitution; further hearing fixed for Friday-Time: 18:55

The Supreme Court today fixed for Friday (02) further hearing into 39 Special Determination petitions filed challenging the constitutionality of the proposed 20th Amendment to the Constitution. The Chief Justice announced that the Supreme Court intends to conclude hearing by Friday (02) itself.

← Why does Sri Lanka's parliamentary election matter? | Inside Story Freedom of Religion and Public Interest: A Look at Sri Lanka, Pakistan, and Europe →